The faster SAA is called CESAA.

The SAA with the compelling specifications for public buildings.

The faster SAA at a glance:

CESAA is a new-generation speech alarming system. As a full-scale SAA, CESAA is technically more efficient and significantly more time-saving in planning, assembly and configuration than a conventional electroacoustic emergency warning system for the evacuation of people in public buildings. Less effort, more security: CESAA comes as standard with an integrated Text-to-Speech (TTS), an integrated WeNet security network (for example, a loopline topology), and a high-availability concept.

all-in-one, scalable for all applications, with 80% time savings

compact and preconfigured with up to 50% time savings

Remote configuration and function packages for up to 90% time savings

As a full-scale SAA, CESAA is technically more efficient and significantly more time-saving in planning, assembly and configuration than a conventional electroacoustic emergency warning system for the evacuation of people in public buildings.

CESAA is delivered as standard with an integrated Text-to-Speech (TTS), an integrated WeNet security network (for example in the form of a loop line topology) and a high availability concept.

CESAA - the fastest SAA at a glance:

With 80% time savings and more success in the offer presentation.

The scalable CESAA system, which consists of a few components, can be used for any language alarming application. Even demanding applications are covered with CESAA at the highest technical level - for example, the supply of a large number of rooms with differently difficult acoustics.

CESAA is an efficient complete solution that supports the planner with innovative tools. The system includes, for example, planning schemes for the calculation of the heat loss and the necessary battery capacity. The easy installation, the redundant network and the scalability for all applications make CESAA the language alarming system with particularly high planning reliability.

"Plug-and-Play" with few components, preconfigured - everything a fitters love.

The simple implementation reduces the set-up time and considerably relieves the installer. A total time saving of up to 50% compared to conventional speech alarming systems is realistic.

Further advantages are the low energy consumption and space requirement. Due to its fully digital design, CESAA produces only minimal waste heat. The exceptionally compact system design reduces the space requirement in a 19 "rack to only 1 U.

Like hardly any other language alarming system, CESAA supports the installer with a considerable time saving, but also with significantly more security in the configuration.

CESAA automatically detects all devices on the network via an auto-discovery function. The guided configuration via a special setup menu makes it possible to perform all necessary network settings quickly and reliably. Errors in the allocation of IP addresses are excluded. DIP or address switch settings are not required.

All desired applications can be set up using the configuration tool via the web browser. By simply connecting to the Internet, CESAA is also configurable on the go, via a smartphone or tablet, independent of the operating system of the user device. A connection to external systems is possible at any time.

CESAA is a language alarming system that can be easily and quickly serviced by any web browser and can be adapted in the event of new requirements.

The CESAA software includes several functional packages which additionally reduce the maintenance and adaptation effort. This results in time savings of up to 90% in the service case.

System errors can be automatically identified by CESAA and reported immediately with concrete correction notes. Depending on requirements and setting, this message is transmitted by telephone as voice message. Alternatively, the query is made over the Internet.

Faster Extended at a glance: 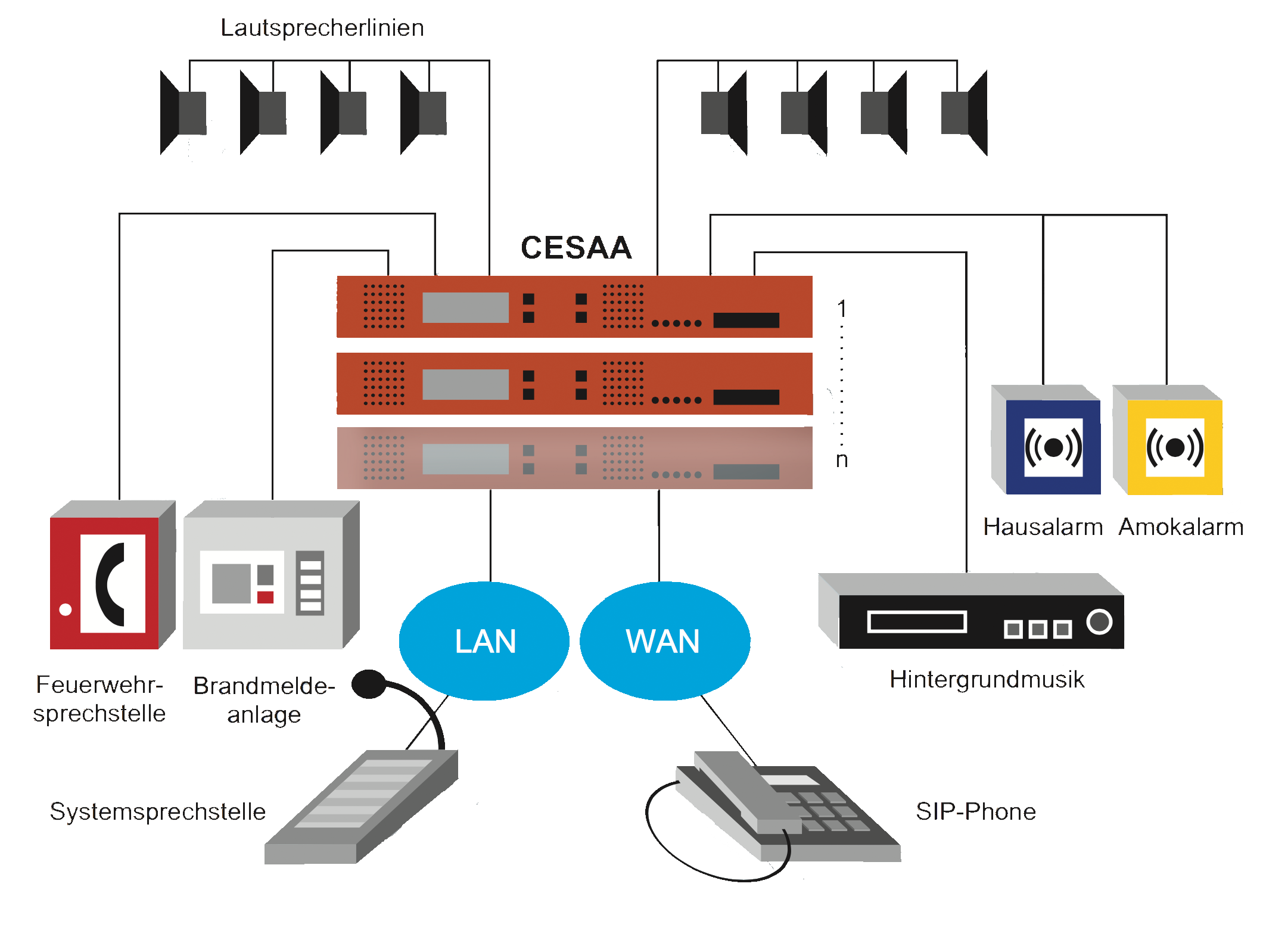 Your Request has been send.

The Request could not be send.

Some cookies on this site are essential, and the site won't work as expected without them. These cookies are set when you submit a form, login or interact with the site by doing something that goes beyond clicking on simple links.

We also use some non-essential cookies to anonymously track visitors or enhance your experience of the site. If you're not happy with this, we won't set these cookies but some nice features of the site may be unavailable.